In the following diagrams, the procedure objects are only shown one time, and then omitted in later diagrams. They are still there, it’s just not really necessary to show them each time, as that part of the diagram does not change. In our model, a procedure (the two-circle symbol with pointers to the parameter list and body, and its enclosing environment) is stored in memory somewhere. When the procedure is evaluated, that is done according to the bindings, but the stored procedure is not affected. Exactly what ‘evaluation’ is will be a major part of the next chapter; for now, we can consider that the evaluator just reads the procedure body and figures out which expression to evaluate next. In most cases I’ve added a box to my diagrams to show which line of the procedure is in the process of being evaluated.

Let’s go over the recursive version first. In the global environment, we have the single procedure factorial defined. We make a call to it with (factorial 6) and a new evaluation frame is created: 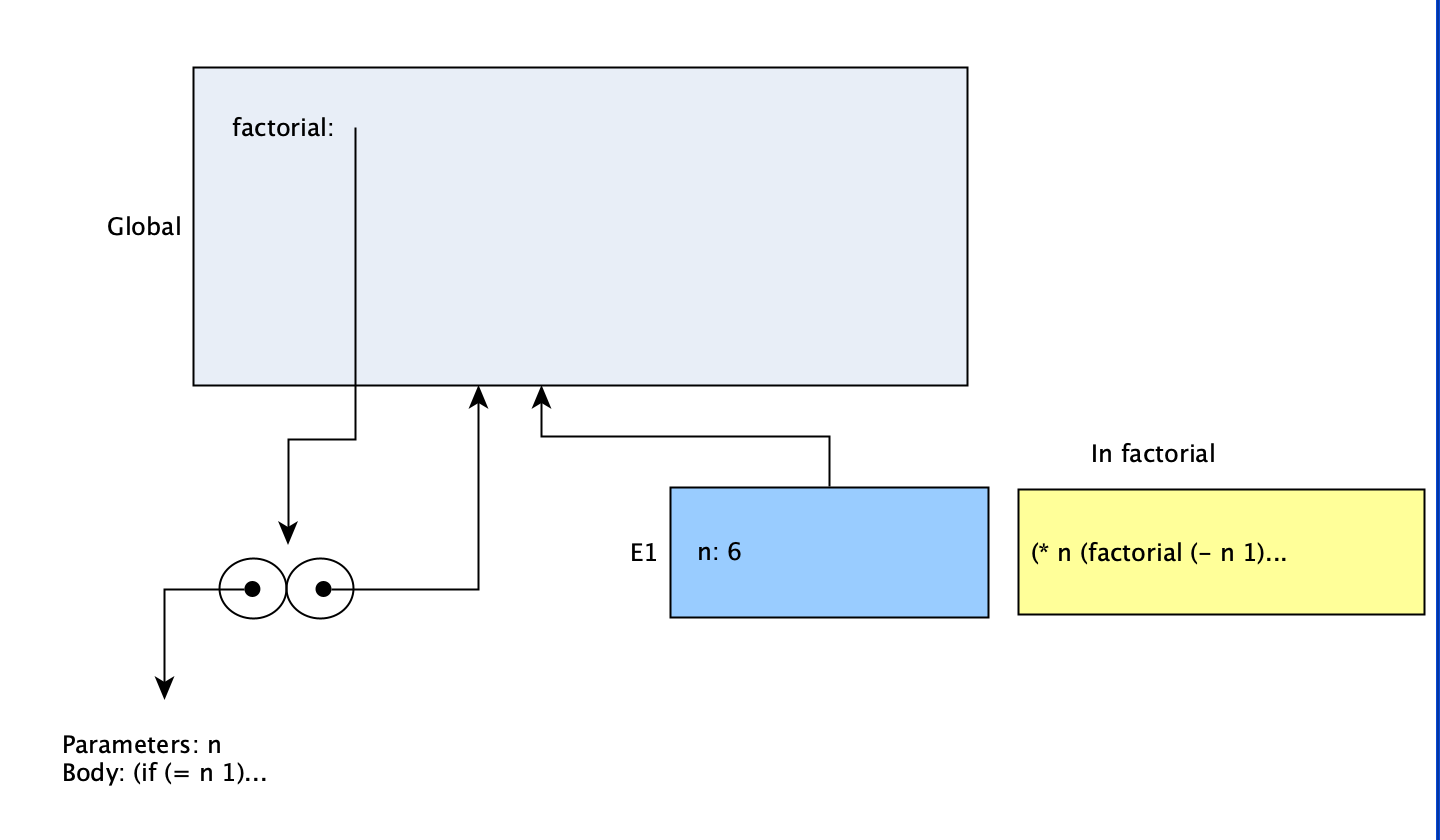 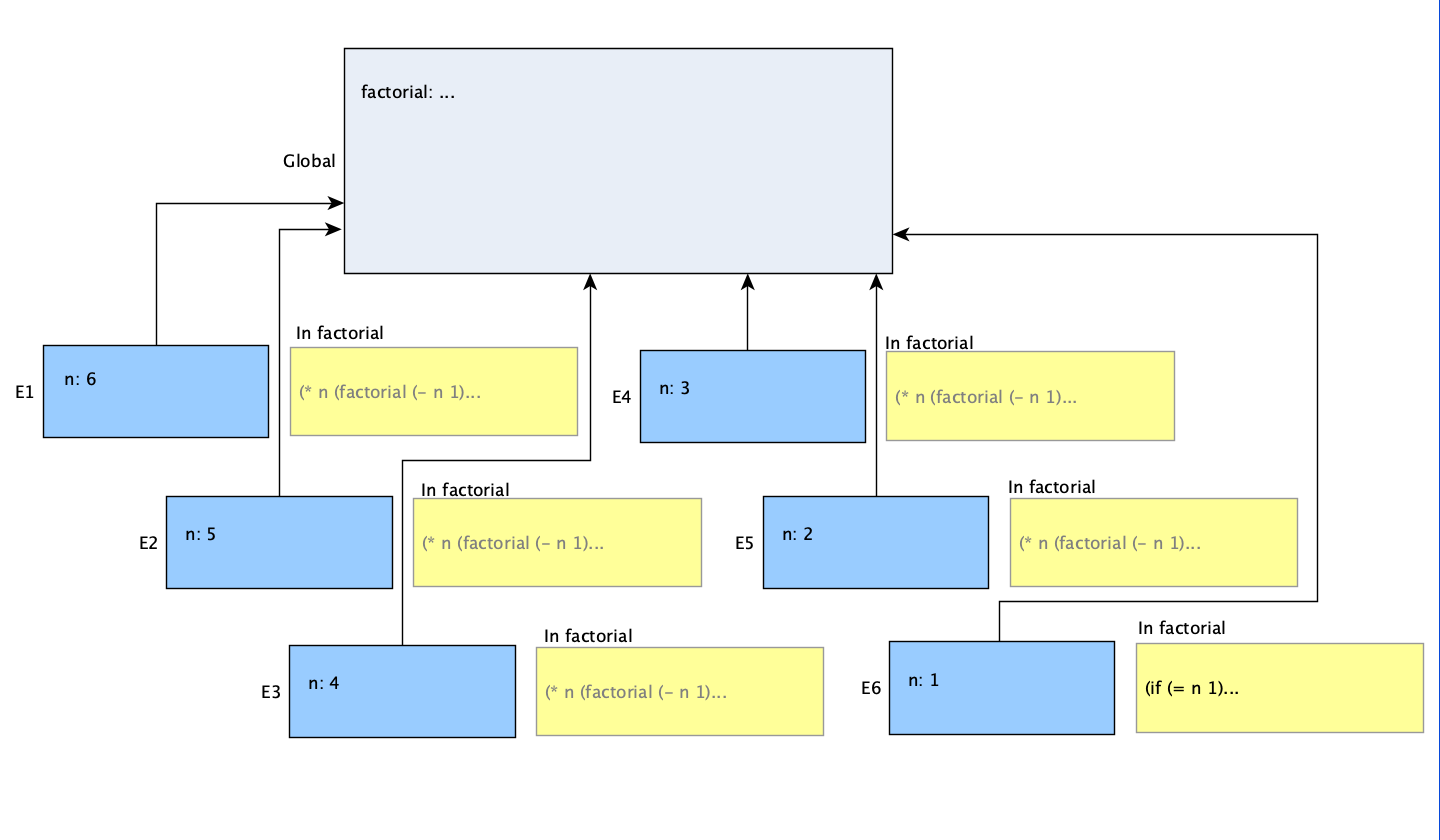 Each procedure is still awaiting the value returned by the procedure calls after it. Once they return, they will finish computing the value and then return. The environment for that call can then be removed, and this will happen in the reverse order in which the environments were created.

For the iterative version, two procedures are defined in the global environment. Otherwise, the model looks initally quite similar to the recursive version, with only the code being evaluated that is different: 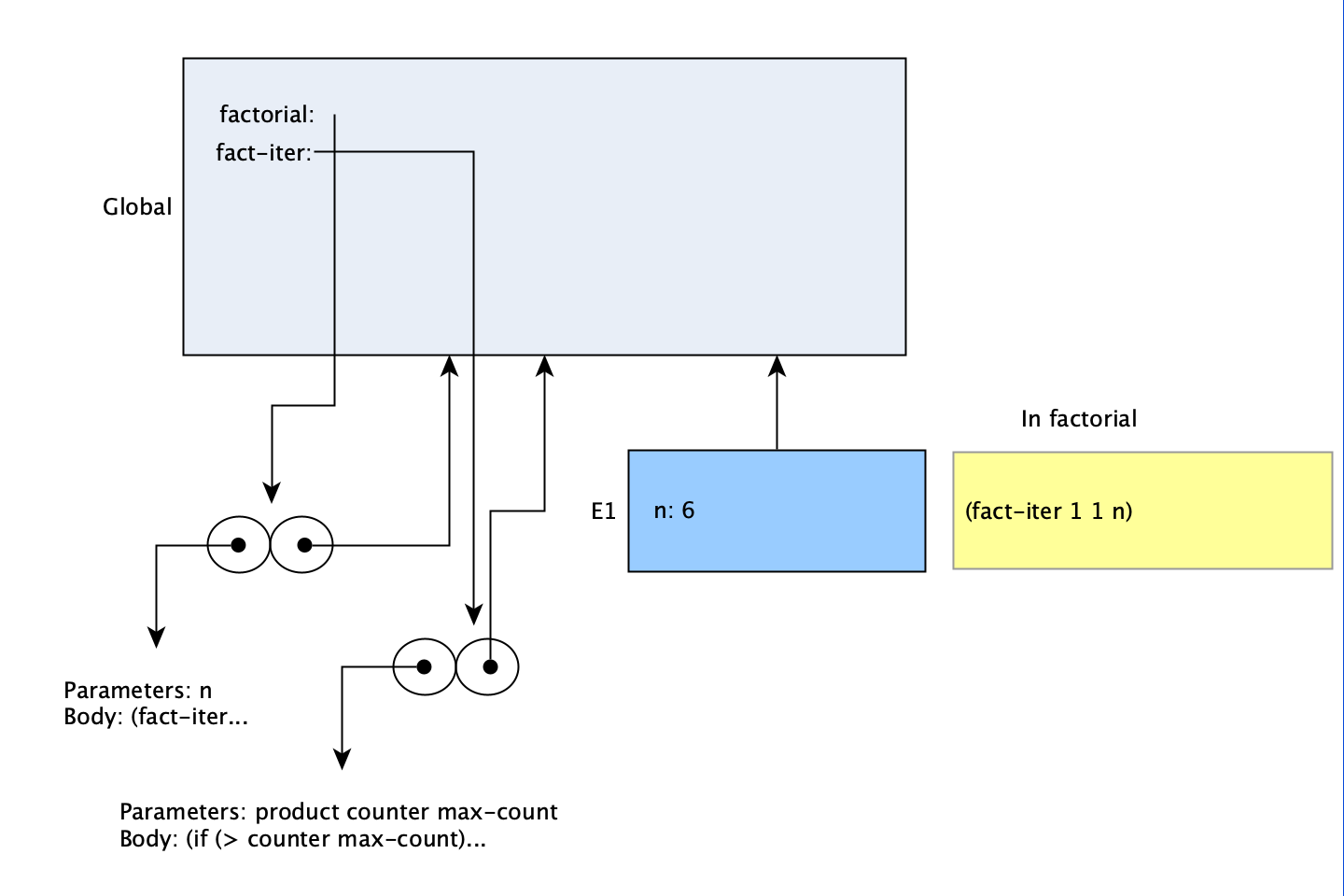 The first procedure calls a second one with different parameters. That means the next frame to be created will be for evaluating fact-iter with the product, counter, and max-count set to their starting values. Each call to fact-iter after that will result in a new call to fact-iter with different arguments, until it is called with counter higher than max-count (the greyed-out environments will be explained shortly): 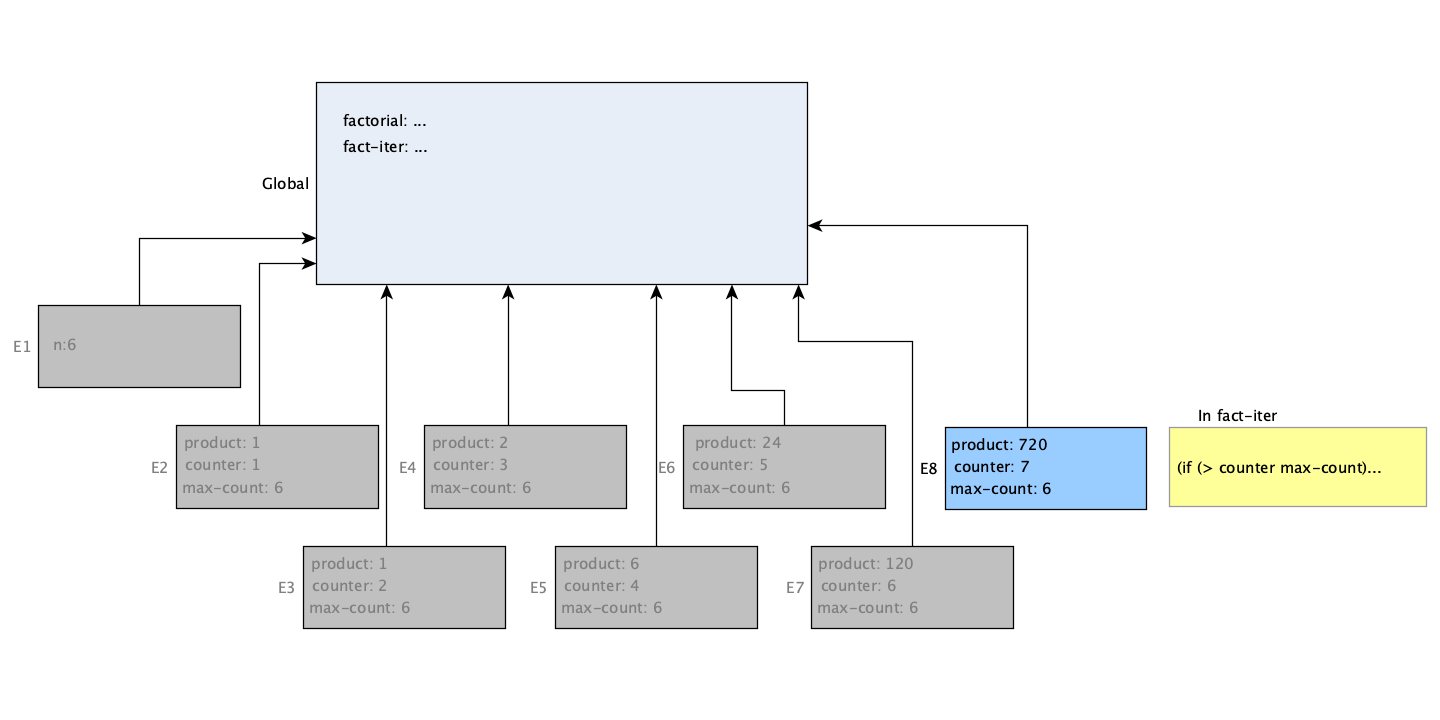 The repeated calls once again produce new frames in the global environment. That means seven more frames are created. Why seven instead of six, as with the recursive version? That happens because of a slight difference in the way the two versions terminate. The recursive procedure counts down to 1, and then terminates at that point. The iterative version counts up, and does not terminate until the counter is past the maximum. It requires an extra call and thus one more evaluation frame. In total, eight frames are created for the iterative version.

However, as alluded to in the text’s footnote for this exercise, this model doesn’t quite tell the whole story. It turns out that it’s not really necessary for all the environments to be preserved in the iterative version. Each of these calls (save the last one) will do nothing but call a procedure and return the value of that call. Nothing in that environment will be needed again. When that is the case, it’s possible to allow that environment to disappear. Scheme actually requires this behavior It’s for this reason that I’ve grayed out all the frames — it’s not necessary for them to remain, and in fact, the interpreter will remove them. The recursive version cannot do this, since it must multiply the result by one of its own environment variables befoe returning.

Under this model, we see that the recursive version grows in space and then shrinks again. The iterative version takes up slightly more space initially, and has more calls (even with the difference in termination conditions), but it never actually requires more than one evaluation frame at a time. This mirrors the substitution model somewhat, which was shown in Figures 1.3 and 1.4 in the text.

There is no ‘solutions’ file for this section, since the procedures are explained in Section 1.2.1 in the text.